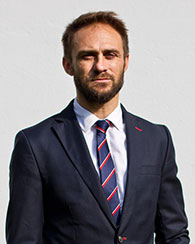 
After studying law at Université MONTESQUIEU in BORDEAUX and the UNIVERSITY OF WESTMINSTER in LONDON, Nicolas Michelot, passed the French Naval Officer exam in 2000.
He then attended the Ecole du Commissariat de la Marine Nationale (French Naval Officer Academy) and after serving aboard the JEANNE D’ARC, was successively assigned aboard the frigate FLOREAL, the MARNE oil tanker and the CHARLES DE GAULLE aircraft carrier as an on-board commissioner (a kind of financial and military legal officer).
He then specialised in law concerning State missions at sea (AEM), by successively carrying out his duties of Legal Adviser at the Mediterranean Maritime Prefecture, then at the Prefecture in FRENCH GUYANA. He dealt with issues concerning actions by public authorities in administrative management and the French sea police – ORSEC planning (sea rescue, ports of refuge, POLMAR-sea pollution, etc.); introduction of regulations in marine protected areas and professional use practices or sea leisure activities; rescue operations (CROSS), maritime anti-pollution (accidental or intentional) measures and fishing patrol.
In 2010, he was assigned to the Chief of Staff of the French Navy in PARIS as a Cabinet deputy assistant where he was in charge of the organisation and follow-up of international relations led by the French Navy Chief of Staff, as well as management and the historical preservation of the Hôtel de la Marine in correlation with the organisation of shows and public relations events for the French Navy Chief of Staff.
In 2012 when he was a principal armed forces commissary (equivalent to a major), he made a change in direction to become a Lawyer.
He took an oath in January 2013 in PARIS and settled in Bayonne at the firm of SCP ALQUIE in February 2013.
He has been working ever since as a general practitioner and handles all kinds of disputes, mostly private.

IMPORTANT COOKIES INFORMATION
We use technical cookies to ensure the proper functioning of the site, we also use cookies subject to your consent to collect statistics visit.
Click below on & laquo; ACCEPT & raquo; to accept the deposit of all cookies or on & laquo; CONFIGURE & raquo; to choose which cookies require your consent will be registered (statistical cookies), before continuing your visit to the site. Show more